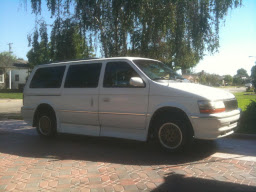 In March 2010, I was a single mom, working as a waitress and homeschooling my two boys. (My daughter had already graduated.) I had a 1992 Town & Country van in desperate need of replacing. The electrical was going crazy. We would be driving down the road, and the doors would lock and unlock, the interior lights flickered on and off. The passenger door was hanging a little, and an elder of the church welded it in place to allow us to close the door. And the back sliding door would open if I took a turn too quickly.

I set aside $3,500.00 from my income tax return and had a customer from the restaurant, who owned a small car lot looking for me a van. And although I didn’t know it, my pastor and some of the elders were trying to figure out how to get me a new vehicle.

One Sunday morning, a retired missionary we had supported for years in Russia spoke during our morning service. Toward the end, when we were praying for provision for some of the villages he helped, I saw this number flash in my head.

Now, I had left my checkbook at home that morning, but we had a birthday party in the park that afternoon for a daughter of one of our church members; I wrote a check for $3,000.00 and handed it to my pastor during the party.

A week later, we had an unexpected freeze overnight, and my pipes busted in the slab of my house. All the men in the church under 60 were at my home on Saturday, putting my plumbing in the attic. On Sunday, all of them except for the pastor was over finishing with the pipes. I have a terrific church family.

During this time, I had turned everything over to God. I knew a good man was out there, but I had decided to stop looking for myself. An older gentleman asked me questions and had finally asked me for my number for his son. I was like, “If your son wants my number, he can ask.”

But his son wasn’t interested in getting into a relationship. He had been married for 26 years and wasn’t looking to do it again. His dad finally convinced him to have lunch with him at the little restaurant where I worked. He did ask for my number but didn’t call right away. When he did call, he said he would see me that Saturday at work. He didn’t show. He didn’t show for several weeks. One evening, it was Tuesday because I was at Boy Scouts with the boys, he called. When he was clocking out, the card he had written my number on had fallen out in his lap with the number face-up.

We had our first date a week after the pipes busted. I knew John was the man God had chosen for me when I told him about giving the money to the church. He missed that I had already written that check and told me I needed to do that because when God says to give you need to listen. 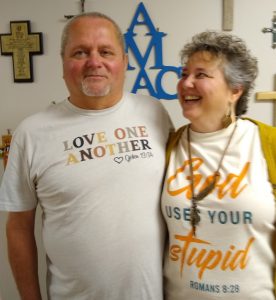 In May of 2010, I had an engagement ring and a new to me van. As of this writing, in November 2020, we are getting ready to celebrate our 10th wedding anniversary in March of 2021. It will also be the 11th anniversary of that first night when I told him I had given $3,000.00 to the church’s Faith Promise drive for missionaries.

Listening to God’s promptings and obeying got me a new van and the husband God had planned for me.